The next 2 weeks there will not be an Online Midweek, but it will resume in the New Year.

Remember: the Central Sign of the Jubilee was people returning to their land.

We find this law in Leviticus 25. You might want to look it over. If you do, pay special attention to verse 9 which says

The shofar is the ram’s horn trumpet

It ws that which heralded the Jubilee:

In 1967 The man who sounded the Ram’s Horn (shofar) during the defining moment of the war was Rabbi Shlomo Goren, the same man who had sent for the priests.

A look at his life:

Born into a Jewish family in Poland, Rabbi Shlomo Goren made aliyah (immigrated) to the Holy Land in 1925. Raised near Haifa, Goren began studying at a yeshiva in Hebron at age 12 and was marked as a child prodigy, publishing his first book at only 17 years old.

From his youth, Goren also felt a strong commitment to Zionism. He volunteered to serve in the Haganah (the precursor to the IDF) in 1936, then served as a chaplain during Israel’s 1948 War of Independence. During that war, Rabbi Goren also qualified as an IDF paratrooper.

After Israel won her independence, Rabbi Goren faced a daunting task – he helped collect and bury the remains of those Israeli soldiers who had fallen in the field. The man of God provided this service to his fellow soldiers and Israelis who had made the ultimate sacrifice for the Jewish state and its people.

Following Israel’s independence, Rabbi Goren served as Chief Rabbi of the IDF. In this position, he helped create and organize the framework for the IDF’s chaplains. He also wrote a new prayer book that spoke to the different prayer styles of the IDF’s various ethnic groups. Rabbi Goren also opposed separating soldiers by religious differences, working for the integration of all serving in the IDF.

As stated above, Rabbi Goren not only served in Israel’s War of Independence, but during the 1956 Suez Crisis and the 1967 Six-Day War, as well. During the latter conflict, one of the defining moments was when the rabbi gave a prayer of thanksgiving after the capture of the Western Wall. In the above photo, Rabbi Goren blows the shofar surrounded by the Torah and fellow soldiers during the first Jewish prayer at the Wall since 1948.

Rabbi Goren and his wife Tzfia had three children – Tchiya, Drorit, and Abraham.

A strong supporter of the alliance between evangelical Christians and Israel, Rabbi Goren’s views can be summed up in this quote:

“Human life is undoubtedly a supreme value in Judaism…This refers not only to Jews, but to all men created in the image of God.”

(From the International Fellowship of Christians and Jews Website)

More will follow on Rabbi Goren at the conclusion of today‘s study.

Like most of the people we have studied so far, Goren probably did not realize that he was participating in a Jubilee in the sense that we have been studying it as one of the mysteries of timing and events that God worked out over the centuries. He would have been aware that God was fulfilling Scripture in returning the land to the Jewish people and the Jewish people to the land. He of course would also have been aware of the 25th Chapter of Leviticus, and in celebration of the return of the land he wanted desperately to blow the shofar in celebration.

How determined he was to do this is seen in the fact that when he packed for battle he packed his shofar with him. During the battle his shofar was destroyed, so he asked his Father-in-Law, the priest he had sent for (also known as The Nazir) for the loan of his shofar. The request was willingly granted by his Father-in-Law, Rabbi David HaChoen. The Lord would use even this as a part of fulfilling the mystery of the Jubilee.

In ancient times it was the shofar of the priest which sounded to announce the Jubilee. While Goren was not of priestly descent, he was, by marriage, a part of a priestly family and it was a shofar from that family that he was using to proclaim the Jubilee marking the return of Israel to her land.

Just a few more details in the mystery: In the Jubilee the land returns to the people and the people to the land. Jerusalem, which was being restored at this time was the special possession of the priests. Additionally Scripture reveals that before the Temple Mount was purchased for it’s purpose it had been a threshing floor. (II Samuel 24). Goren in Hebrew “just happens” to mean threshing floor. He was also born in 1967 the Jubilee preceding this one and setting the stage for it. 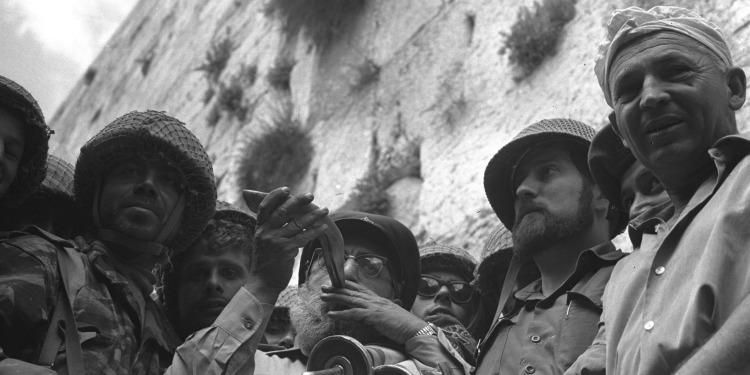 Many know the story of Rabbi Shlomo Goren arriving at the Western Wall flanked by IDF troops in the 1967 Six Day War on the 28th of Iyyar in the Hebrew calendar.

The moment, captured in an iconic photos, shows the rabbi holding a Torah scroll and blowing a shofar at the Western Wall surrounded by young soldiers. But few people know the even more astounding story of what happened the day after that photo was taken and how Rabbi Goren single-handedly conquered the holy city of Hebron and the Cave of the Patriarchs, known as the Machpelah Cave.

The war was still raging after the Old City of Jerusalem was conquered by the IDF. Directly after the emotional scene at the Western Wall, Rabbi Goren, a general and the Chief Rabbi of the Israeli army, proceeded to join the forces gathered in the recently recaptured Gush Etzion. The troops were waiting for the morning when they would push on to battle the Jordanian Legion in Hebron.

Rabbi Goren addressed the troops, telling them of the enormous significance of Hebron to the Jews. He lay down to sleep surrounded by Israeli soldiers, telling them to wake him in time to leave for the battle the next day. However, when he awoke a few hours later, he was alone. The troops had moved on without him. He quickly woke up his driver and they set out to catch up with the Israeli forces.

Alone, they drove the short distance into Hebron and were greeted by flags of surrender, white sheets hanging from every window and rooftop. The rabbi didn’t see any Israeli soldiers and assumed they had already conquered the entire city. What the rabbi didn’t know was that he had arrived before the troops. The army had taken a longer route in order to surround the city before entering it. As he drove toward the Cave of the Patriarchs, he was the only Jew, certainly the only Jewish soldier, in a city of 40,000 Arabs.

When Rabbi Goren arrived at the large iron doors of the Cave of the Patriarchs, he found them locked.  Rabbi Goren shot at them with his Uzi machine gun, trying unsuccessfully to open the doors which had been locked to Jews for 700 years. The bullet holes are still there and can be seen by anyone visiting the site today.

The doors did not open, so he backed his jeep up and attached chains to the doors, pulling them open. Rabbi Goren entered the Machpela, blew the shofar as he had done the day before at the Kotel, set up the Torah scroll, and began to pray.

The Mufti of Hebron sent a messenger to ask Rabbi Goren, as a general of the Israeli army, to accept his surrender. He refused, sending back the answer, ”This place, the Machpelah Cave, is a place of prayer and peace. Surrender elsewhere.”

The first Israeli troops in Hebron were shocked to find an Israeli flag flying from the roof of the Machpelah. The next day, the rabbi received an urgent message from his officer, the Israeli Chief of Staff, Moshe Dayan. He ordered Rabbi Goren to take down the flag, remove the Torah from the premises and to order anyone entering to remove their shoes because the site was a mosque.

Rabbi Goren sent a message back in response: “The Torah is holy – it stays. The flag means to me what it means to you. If you want to remove it, you may, but I will not.”

Dayan sent an officer to remove the flag, but after removing the flag, the officer died in a horrible car accident on his way to report back to Dayan. Dayan then rescinded his orders.

(From the International Fellowship of Christians and Jews Website, including picture)